When Burger King shift manager Mike Aldridge walked to his job in Florida that day, little did he know that his life was going to change. It was while Aldridge was making his usual 17 mile-commute to work that he was stopped by a Good Samaritan.
Also on the way to work was Wes Locke, the principal at Spring Creek Charter School. When Locke saw Aldridge dressed in a dark work uniform, he stopped to give him a ride.
“I thought to myself, he looks like he is headed to work but the closest business around there is five miles away at least.”
When Locke asked the man if he was headed to work and where, the man said he worked at Burger King in Eustis.
“Well, my jaw about hit the floor of my truck! That is 8.4 miles away from where we were! I said, ‘Are you serious?’… He says, ‘Yeah, I have no choice. Gotta’ get to work,” Locke wrote in a Facebook post. 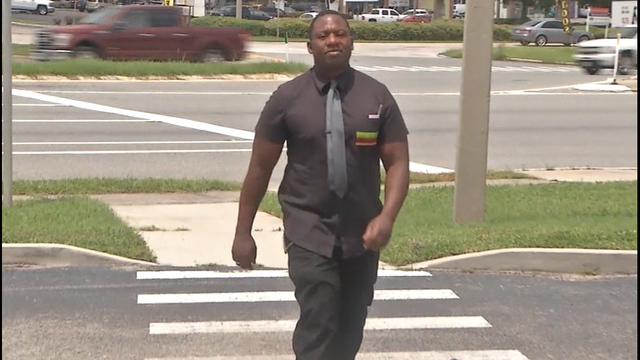 Locke was so inspired by this man’s work ethic that he decided to give him a ride to work. The man introduced himself as Mike Aldridge. Aldridge said that he and his wife who has epilepsy and can’t work had just moved in with his sister and between them, they only had one car. Aldridge couldn’t afford to buy a car of his own.
Aldridge told Locke that there are no bus routes from his home to where he needs to go and that Uber is too expensive.
Upon hearing Aldridge’s story, Locke decided to raise the money to get Aldridge a bicycle. Locke ended up surpassing his goal by raising over $3,000. After learning that Danny Len Buick GMC, of Mount Dora, has agreed to donate a car, the money that was raised will now be used for Alberidge’s insurance, registration, and fuel expenses.
“It’s a blessing in disguise that you still have good people that look out and help you along the way for doing the best that you can and trying to do what’s right,” Aldridge said. “I’m happy! I’m very happy!”