On the heels of the marches for women’s liberation, a new demographic emerged as leaders on Saturday, March 24th: the generation born after 1999. The March for Our Lives event felt different from previous protests because the demonstrators had an apolitical message: to keep America’s youth safe—a message every American should be able to support. Emily Witt of The New Yorker reports that Martin Luther King, Jr.’s 9-year-old granddaughter Yolanda Renee King was even in attendance with the message, “I have a dream that enough is enough…and that this should be a gun-free world.” Adult demonstrators have been quietly enthusiastic to join their younger counterparts and relatives, but high school students led by the survivors of the Parkland, Florida shooting have been the faces of the march. The March for Our Lives’ organizers hope to force politicians to enact real change in the form of stricter gun control laws after the massacre at Marjory Stoneman Douglas High School. The main march took place in Washington, D.C., with over eight hundred sibling marches taking place throughout the country and the world, according to the March for Our Lives’ official website. 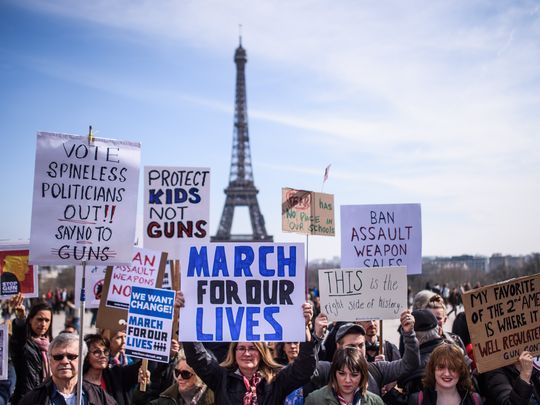 The marches have had a wide-reaching and profound effect, with satellite marches happening everywhere from London to Sydney to Tokyo. The marchers estimated that 500,000 people would show at the D.C. march. However, the total amount that actually were present is unclear. Organizers of the march approximate that 850,000 attended the D.C. march, whereas the Digital Design & Imaging Service estimated that just over 200,000 protesters were in attendance. The young protesters were able to attend in part because of how their message resounded with corporations and celebrities. George and Amal Clooney gave a half-million dollars toward the March for Our Lives rally, and Oprah Winfrey was so moved by the march’s student organizers that she also promised to contribute 500,000 dollars toward the cause. Other celebrities—including Steven Spielberg and film exec Jeffrey Katzenberg—have followed in the Clooneys’ footsteps.  Ellen DeGeneres and Shutterfly teamed up to donate $50,000, while John Legend and Chrissy Teigen likewise contributed $25,000 to the march. Many individuals, regardless of fame, have been touched by the march’s aim: to ensure that no child or adolescent is killed while attending school because of gun violence. The march’s official mission statement declares, “School safety is not a political issue. There cannot be two sides to doing everything in our power to ensure the lives and futures of children who are at risk of dying when they should be learning, playing, and growing…” Witt argues that there has been “so much consensus about the message of the student movement that it has to be one of the least anti-establishment social movements in American history.” The student organizers from Parkland have been appreciative of their corporate sponsors and celebrity donors, and their innocence and earnestness is visible in news interviews as well as appearances in Teen Vogue and Time magazine. They simply ask politicians to advocate for gun control, not the complete elimination of guns–an action that would infringe on conscientious firearm consumers’ rights.

Though the march itself had multiple highlights, two young speakers had particularly poignant words for those who joined them in solidarity. In a powerful speech at the D.C. rally, Parkland student Emma Gonzalez remained on stage during six minutes and twenty seconds of silence—the short window of time it took the shooter to end seventeen lives. Before the moment of silence, Gonzalez mentioned the names of the victims and tearfully gave examples of commonplace moments they would never have the opportunity to experience again. One of the other young speakers, 11-year-old Naomi Wadler, spoke of her own harrowing encounter with a gunman in a grocery store. She proclaimed her eagerness “to represent African-American girls whose stories don’t make the front page of every national newspaper,” drawing attention to the uneven media coverage that tends to exclude minorities from the narrative during times of tragedy.

Aside from speeches by young people who have needlessly encountered gun violence, celebrity performances were interspersed with montages of politicians repeatedly offering their thoughts and prayers, while other video segments featured certain lawmakers asserting that now was “not the time for gun control”. The speakers included not only the Parkland students, but people throughout the nation who have been affected by gun violence. This also included those impacted by police shootings. There was a strong celebrity presence at the march, including performers such as Jennifer Hudson, Ariana Grande, Demi Lovato, and Miley Cyrus. Jennifer Hudson had a personal stake in the rally, as she had lost her mother, brother, and nephew as a result of gun violence. Famous figures who could not join the march in person, such as Mariah Carey and Harry Styles, have urged their Twitter followers to participate by signing the March for Our Lives online petition.

The students’ efforts have not been in vain, as Florida recently approved new gun control laws that prohibit bump stocks, ban individuals under 21 from buying firearms, allot more money toward school safety initiatives, and enforce a three-day waiting period for consumers buying guns. According to the BBC, the White House praised the protesters for their bravery and proceeded to list the ways the federal government is pushing back against gun violence, including prohibiting bump stocks and increasing criminal background checks for those seeking to purchase guns. In the current climate of protest, 69% of Americans support stronger gun control laws, though the NRA and its supporters have concerns about their Second Amendment rights. Additionally, on April 20th, nineteen years after the Columbine shootings, the students will hold a National High School Walkout to further awareness to end school shootings once and for all. These measures sparked predominantly by America’s youth are promising signs of change, but time will tell how many other precautions lawmakers are willing to take.